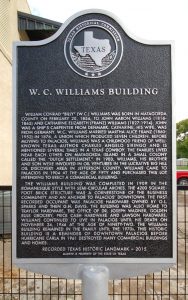 The story of the W. C. Williams Building is a story that has been told thousands of times across America. Men and women with vision and drive decide to settle an area of the country, take up roots and raise a family. In so doing they build homes and businesses and leave a permanent legacy, a forever stamp on the cities and towns they frequented.

So it was with W. C. “Billy” Williams, born in 1856, son of immigrants − a Danish father and German mother − raised on wind and surf swept primitive Matagorda Island in an area called Dutch Settlement; raised during the Civil War; grew up with and was a childhood friend of well known western author Charles Angelo Siringo (1855-1928); married his childhood sweetheart, Martha Alice Franz Williams and raised a family of seven children who would all go on to be productive citizens.

As part of this legacy, Billy Williams came to Palacios in 1904, purchased land in 1908 at the corner of Commerce and 5th Streets and built a 4,200 square foot two story brick Romanesque structure. The building would become a lasting testament to the drive and perseverance of those early settlers of Matagorda County.

The W. C. Williams Building, built in 1909, has been a cornerstone and anchor to the commercial and cultural life of Palacios for 112 years. And to realize the structure has endured all these years in an area prone to hurricanes such as Carla in 1961 − a miracle indeed.

Many businesses have graced her brick walls for the better part of the 20th Century and into the 21st Century.  Countless thousands of Palacios citizens as well as visitors have walked and shopped within the structure. Hundreds of students studied and learned an occupation on her second floor in the 1980s and 1990s. The venerable structure has served the community well and will continue to do so well beyond the tenure of its current owners.

W. C. “Billy” Williams’ foresight to construct what became the W. C. Williams Building and the contribution the structure has made to Palacios business and history, will live on for years to come. Those of us who will have the opportunity to live and work in the structure will be forever indebted to Williams’ vision and the investment he made in the future of Palacios.

For years Paul & Donna Christensen had dreamed of living on the Texas Gulf Coast. Besides hoping to move to a small town, their plans included the unusual desire of locating an old downtown commercial building and restoring/remodeling the structure.  In 2010, a multi-year Internet search led them to Palacios and the building at 456 Commerce Street, originally built in 1909.

The structure, erected just after the town was founded, is the oldest still standing commercial building in the city and sits just one block from and in view of Tres Palacios Bay, part of the larger Matagorda Bay. The building was built by W. C. “Billy” Williams, a childhood friend of well known western author Charles Angelo Siringo (1855-1928). Siringo mentions several references to W. C. Williams whose nick name was Billy, his wife, Martha Alice Franz Williams (1860 – 1952) and his father, John Aaron Williams (1816 – 1865), in his book A Texas Cowboy or Fifteen Years on the Hurricane Deck of a Spanish Pony, first published in 1886.

The Christensens spent the better part of three years updating the structure and turning the location into a single family dwelling. Besides remodeling upstairs, the dropped ceilings of the downstairs offices were removed and the rooms were framed back up to allow nine and ten foot ceilings. A custom-designed air and heating system was installed, allowing for the highest efficiency while preserving the historical integrity of the building.

The Christensens live upstairs, which houses 2 bedrooms and 2 full baths, as well as kitchen and living areas. The downstairs is a home/office to Omega Productions, the entertainment production company owned by the couple. The company’s live concert television and event consulting projects are executed all over the country, not locally. In addition, Donna has an office downstairs which supports her continued interest in books, history, genealogy and other pursuits and an ample area for her books. A downstairs two room guest suite, with private street entrance, rounds out the downstairs floor plan.

The building is of Romanesque design, an architectural choice popular in the late 19th and early 20th century. The building is 30 ft. x 70 ft., allowing for 4,200 sq. ft. of space in the structure. In all, the building has 3 bedrooms, 3 full bathrooms, 2 half baths as well as office and storage areas. The structure was originally a hardware store where the family lived upstairs. Over the years it has served as home to various commercial stores, as offices, as a boarding house, a vocational training center for Palacios ISD, and a private residence, among others.

In February 2015, the Christensens were notified that the Williams Building had been designated as a Recorded Texas Historic Landmark (RTHL) by the State of Texas.

Paul and Donna love living in Palacios. They are truly blessed to be living in a city where the people are so nice and friendly. They are here to stay.

More pictures of our area
From the Palacios Film Friendly Program

Program segment on Palacios from the television series “Road Trippin’.”

Restoration of the Building

The Christensens spent the better part of three years updating the structure. A new Duro-Last commercial roof was installed and repairs to various roof support truss beams were completed, including new insulation batts. A new commercial gutter system was installed to handle storm water run off. New flooring was installed throughout the building both upstairs and downstairs.

Because of the proximity to the the Gulf and the threat of water damage from hurricanes, the couple opted for a handsome antique vinyl plank product rather than wood. The upstairs was repainted and both bathrooms were updated to a period look with antique fixtures and accessories.

Besides remodeling upstairs, the dropped ceilings of the downstairs offices were removed and all air handlers and ducts were removed. A custom-designed air and heating system was installed, allowing for the highest efficiency while preserving the historical integrity of the building.

All air handlers were installed in closets to provide proper isolation. The system provides 4 tons of cooling to the downstairs offices and storage areas and 1.5 tons of cooling for the Guest Suite.

All the downstairs rooms were framed up with drywall to nine and ten foot ceilings, as would be common in a building of the period. One of the downstairs offices was converted into a two room Guest Suite with street level private entrance. A full bath with shower was installed.

Both downstairs offices had bathrooms which were remodeled with the installation of beadboard and wainscoting, as well as period sinks and fixtures. An additional double Men’s bathroom was converted to a storage area. The two room west entrance area was converted into one large room after proper support beams were installed.

The area, now called “The Vestibule,” serves as an additional entrance and sitting area, with all four walls lined with book cases.

The wooden portions of the building that frame the entrances downstairs were replaced with HardyPlank to extend their life. Extensive reworking of various walls and other areas were undertaken to strengthen the structure. This included removing termite damage, mold and rotted timbers.

Extensive mortar repair and tuckpointing were undertaken to the exterior brick, a process that because of cost and timing, is on-going. Future plans include the installation of a metal antique fence and replacement of all upstairs windows with versions that utilize the curved structure of the Romanesque decorative window design.

no images were found