The historic W. C. Williams Building, built in 1909, was recently recognized as a Recorded Texas Historic Landmark (RTHL) during a ceremony in Palacios, TX. The building has been a cornerstone and anchor of the commercial and cultural life of Palacios and Matagorda County, Texas for 108 years.

The ceremony was sponsored by the Matagorda County Historical Commission (MCHC). Attending the ceremony were members of the commission, including Ona Lea Pierce, Chairman and David Holubec, County Marker Chairman. Matagorda County Judge Nate McDonald, Palacios Mayor Glenn Smith, Pam Oliver, Executive Director of the Palacios Chamber of Commerce, David Kocurek, City Manager of Palacios and the Rev. Eric Young, Pastor of Agape Family Outreach Church, also took part in the ceremony. As an additional bonus, Dreanna Belden and Jake Mangum, representatives of the University of North Texas (UNT) Library System and the UNT Digital Projects Unit were also present. In addition several descendants of the Williams and Gillett families were in attendance.

The UNT Digital Projects Unit recently completed a scanning project of the Palacios Beacon newspaper back to 1911. The Beacon project and the UNT sponsored Portal to Texas History provided much of the historic research leading to the Williams Building RTHL designation. 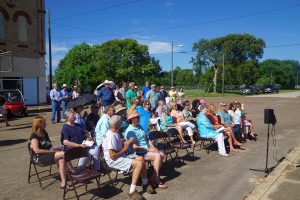 Billy Williams and Charlie Siringo were born and grew up on Matagorda Island in a section called Dutch Settlement (German Settlement). As they grew older, both young men remained infatuated with their childhood friend, Martha (Martha Alice Franz Williams (1860 – 1952). As it turned out, Billy got the girl and Charlie got the cowboy and Pinkerton detective career.

It has been 12 years since the last Recorded Texas Historic Landmark (RTHL) Marker was dedicated in Palacios, TX. More information on the Williams Building history and the restoration is available at www.williamsbuildingpalacios.com.

The W. C. Williams Building, built in 1909, has been a cornerstone and anchor to the commercial and cultural life of Palacios and Matagorda County Texas for 114 years.